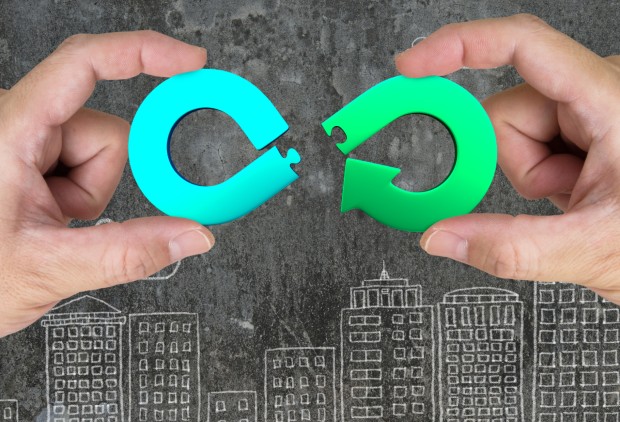 What is the circular economy, and how does it apply to construction? USGBC, which applies circularity in its LEED v4.1 rating system, offers the following definition:

A circular economy captures the benefits of materials throughout their life span and seeks to keep materials in circulation as long as possible. This can be achieved through long-lasting design, maintenance, repair, reuse, remanufacturing, refurbishing and closed recycling loops. A circular economy is the opposite of a linear economy—the standard “take, make, dispose” model of production—and it represents an unprecedented opportunity to reduce costs, embodied carbon and strain on natural resources and ecosystems.

So, how does the building design and construction industry apply the circular economy to its practices, as opposed the entrenched linear method, which continues to compound environmental degradation?

Before and after the build

The circular economy is applied both before and after the build, says Naomi Warr, group environmental manager at McLaren, in an article for Raconteur. “With a circular design approach, we can change components to be reused continually in future projects, with less waste. We can also improve the process with industrialised and modular construction, as well as the supply chain, to reduce transportation costs and emissions,” she says.

Auditing and encouraging the supply chain to include items like recycled building materials, and taking into the mind a building’s entire lifecycle rather than simply operational usefulness, are applications of circularity. Utilizing items, from building materials to equipment, which can more easily be recycled after their usefulness, is another example, as well as repairing rather than replacing certain items and reusing components rather than sending to landfill. In the construction field, renting less frequently-used machinery rather than buying is another waste-reducing application.

A very strong example of the circular economy in building design is the practice of adaptive reuse. Adaptive reuse is where an existing building is repurposed for a use other than its originally intended purpose. When substantial portions of a building are given a new lease on life in a new application, the environmental benefits and cost savings are plentiful.

Has your design or construction operation applied circularity in its operations? Join us in the conversation on Twitter, Facebook, LinkedIn, or Instagram and let us know.

Regenerative design has the goal of producing buildings that have a net-positive impact on their surroundings – restoring or improving their locales rather than aiming for less harm.

Energy efficiency, reduced carbon output and sustainability measures have been targets for those designing and operating commercial buildings for some time. Now, with Net Zero – where a building emits zero or less emissions through reduction measures - the goalposts are shifting even further.